This paper provides guidelines for the testing of high pressure gases used in cleanrooms according to the cleanliness limits derived from the ISO 14644-1 cleanroom classification standard, the FDA cGMP guidelines and the EU GMP Guidelines. Specifically, this applications paper relates to satisfying the air particle concentration limits of Class 100 (ISO 5) where product is exposed to the air environment.

This paper provides guidelines for the testing of high pressure gases used in cleanrooms according to the cleanliness limits derived from the ISO 14644-1 cleanroom classification standard, the FDA cGMP guidelines and the EU GMP Guidelines. Specifically, this applications paper relates to satisfying the air particle concentration limits of Class 100 (ISO 5) where product is exposed to the air environment.

The scope of particle concentration limits in the FDA guidance is not just confined to the ambient air. Compressed gases such as air, nitrogen, and carbon dioxide are routinely used in cleanrooms and are frequently employed in purging or overlaying. The FDA guidance indicates that these compressed gases should be of purity “equal to or better than that of the air in the environment into which the gas is introduced.” Section IV of the cGMP, Buildings and Facilities, addresses the need for appropriate air quality controls for aseptic processing areas of biopharmaceutical cleanrooms1. Such areas are defined as being critical because particles can enter a product as an extraneous contaminant in addition to presenting a biological contamination risk by acting as a vehicle for microorganisms.

Table 1. Particle limits as defined in the FDA Guidance for Industry cGMP 2004

EU GMP Annex 1 is less specific than the FDA Guidance. Section 81 of the guide, which covers the subject of materials required to be passed into the clean area where aseptic work takes place, indicates that non-combustible gases should be passed through micro-organism retentive filters2. Section 60 indicates that gas filters (among other critical systems and components) should be subject to validation and planned maintenance and that their return to use should be approved. Section 33 of the EU GMP, which addresses the handling and filling of aseptically prepared products, specifies that such activities should be performed in a Grade A environment with a Grade B background.

Particle concentrations in compressed gases are typically measured using conventional air particle counters routinely used in cleanroom environmental monitoring schedules. However, direct connection of such instruments to high pressure gas lines is generally not possible. A device called a high pressure diffuser or HPD is required to reduce the pressure of the gas to be sampled to ambient such that the gas may be sampled at the instrument’s standard flow rate while at the same time not introducing particulate contamination to the gas sample. In addition to the required pressure reduction, the HPD maintains isokinetic flow through to the device output to ensure that the size-distribution of any particles suspended in the gas is not skewed. 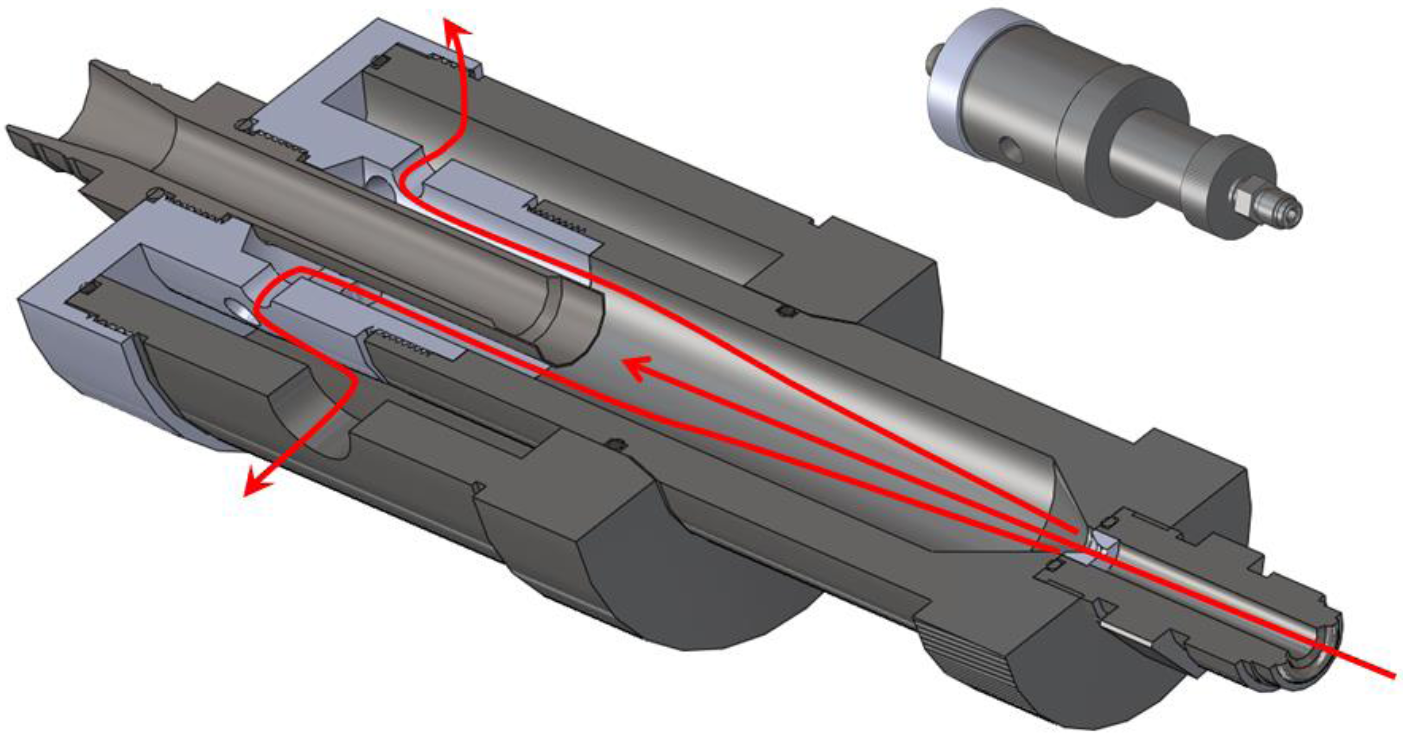 Figure 1. The MET ONE High Pressure Diffuser or HPD in cross section indicating the flow path to the Isokinetic sampling inlet and the exhaust 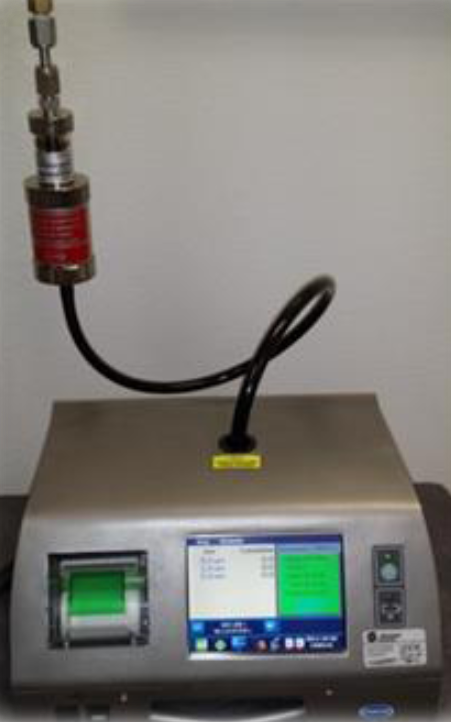 Figure 2. The MET ONE HPD connected to a MET ONE 3400 series counter and a gas line

To sample high pressure gas lines, the HPD is installed between the connection to the gas source and the inlet of the particle counter. The presence of the HPD results in a drop in line pressure by diverting excess gas away from the sampling path and thus avoiding over pressurizing the particle counter’s sensor. Excess gas is diverted through a port in the HPD chamber either directly into the environment or away to a different location via tubing.

It is important that the HPD is supplied with gas within the specified operating range. Running the HPD at too high a pressure will result in inaccurate particle counts whereas operating below the lower limit will result in air being drawn back through the exhaust port thus contaminating the gas sample.

A second requisite for compressed gas particle counting applications is the necessity to adjust the particle counter’s sample flow control system to compensate for the density of the selected gas. Sampling at the true mass flow rate is necessary for accurate volumetric sampling to be achieved in accordance with ISO 14644 and to comply with the ISO 21501-4 calibration standard for air particle counters. The MET ONE 3400 series makes this necessary adjustment very easy and intuitive for the operator.

In this model the gas option, together with the appropriate High Pressure Diffuser (HPD), makes gas monitoring straight-forward. The user simply selects the required gas from a pull-down list on the 3400 interface. With the appropriate gas to be sampled selected, the pump control system is automatically adjusted to ensure that a 1 CFM flow rate is maintained for the selected gas.

Figure 3. Selecting the gas to be monitored via a sample drop-down on the MET ONE 3400 user interface 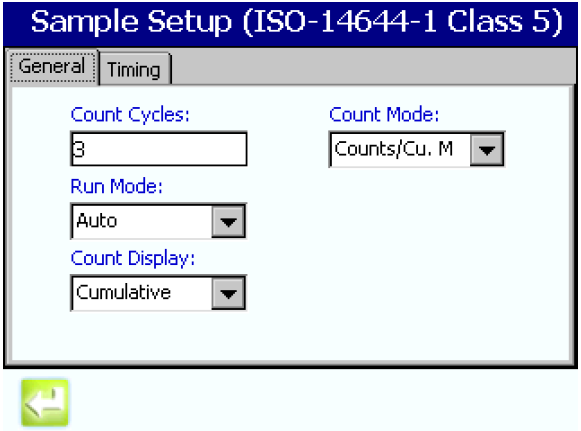 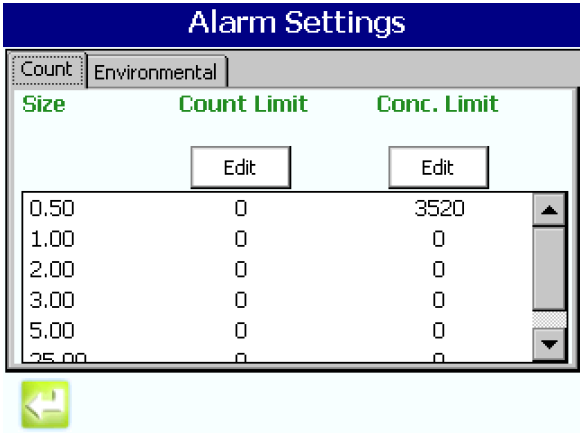 Particle results are typically reported as an average of a number of sample runs. The following example of a particle measurement on a compressed Nitrogen line demonstrates the MET ONE 3400 series support for traditional paper printout, PDF and Excel compatible files. 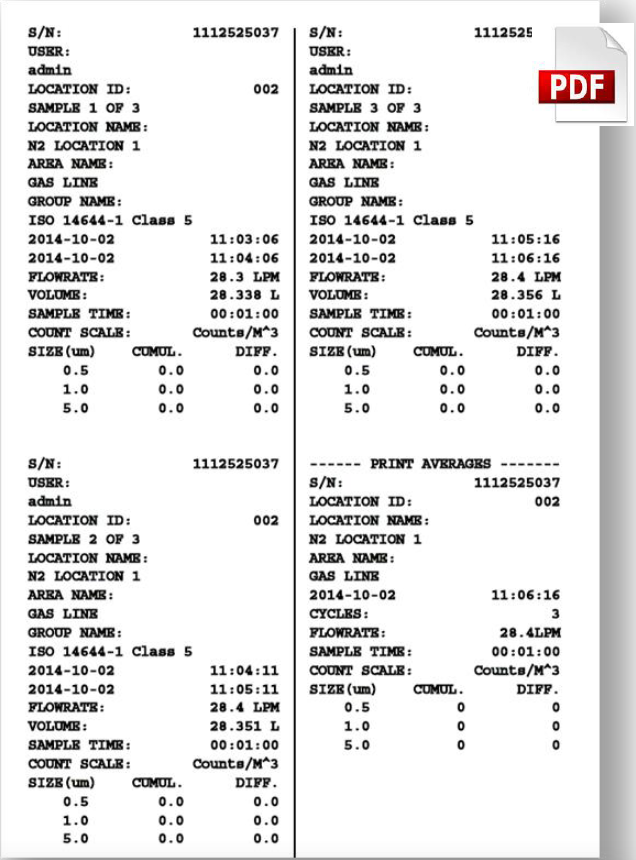 Figure 6,7,8. Instrument printout of a compressed Nitrogen test based upon 3 samples and an average. PDF and Excel outputs are also available on the MET ONE 3400 series portable particle counters.

To conduct particle testing of compressed gas lines with the MET ONE 3400 series is straight forward. Ordering a new 3400 with gas calibration can be done with a single part number. Six versions in the series are available which include gas calibrations for air, Nitrogen (N2), Carbon Dioxide (CO2) and Argon (Ar).

In addition to the MET ONE 3400 particle counter, a high pressure diffuser is required.

Users with existing MET ONE 3400 series particle counters wishing add gas calibration to their instruments may order this as a factory service option.

The MET ONE 3400 series with gas calibration option, used in conjunction with the MET ONE 3400 High Pressure Diffuser, make testing of high purity compressed gas to ISO 14644-1 easy, eliminating the potential for sampling errors associated with flow rate, thus ensuring compliance to the ISO 21501-1 calibration standard. 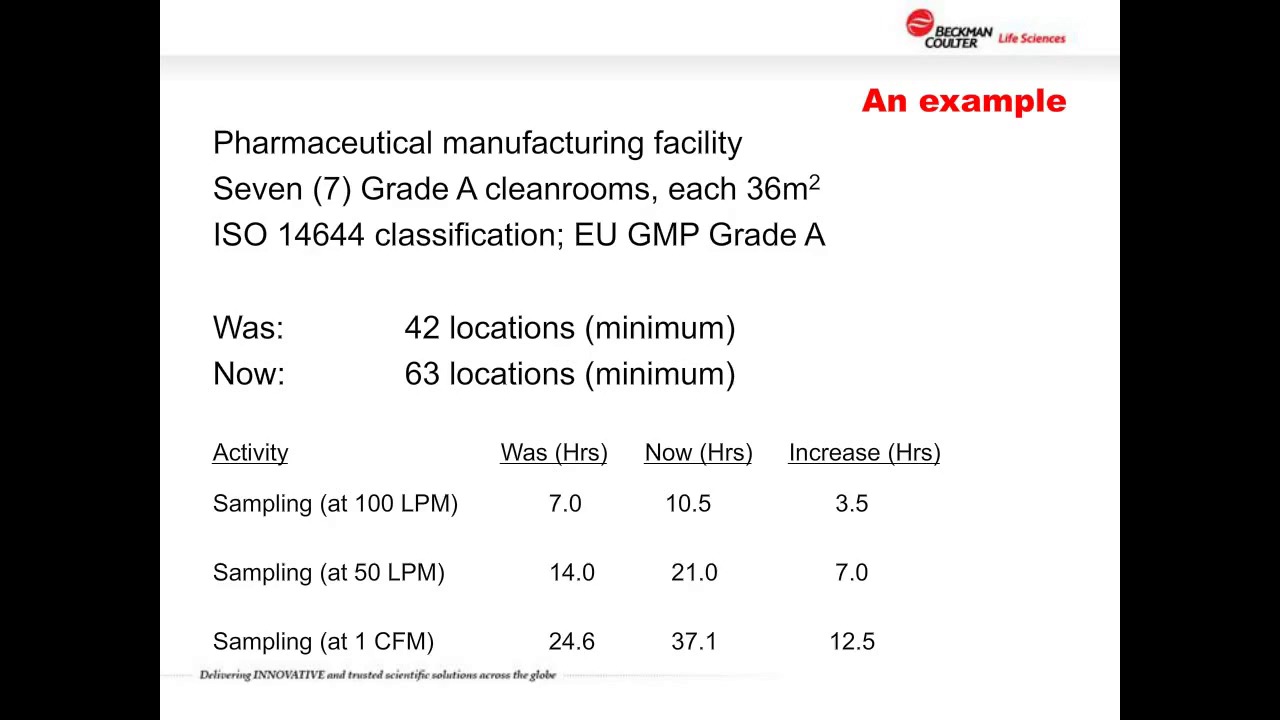 Changes to ISO-14644-1 and -2: impact on classification methods and monitoring strategies